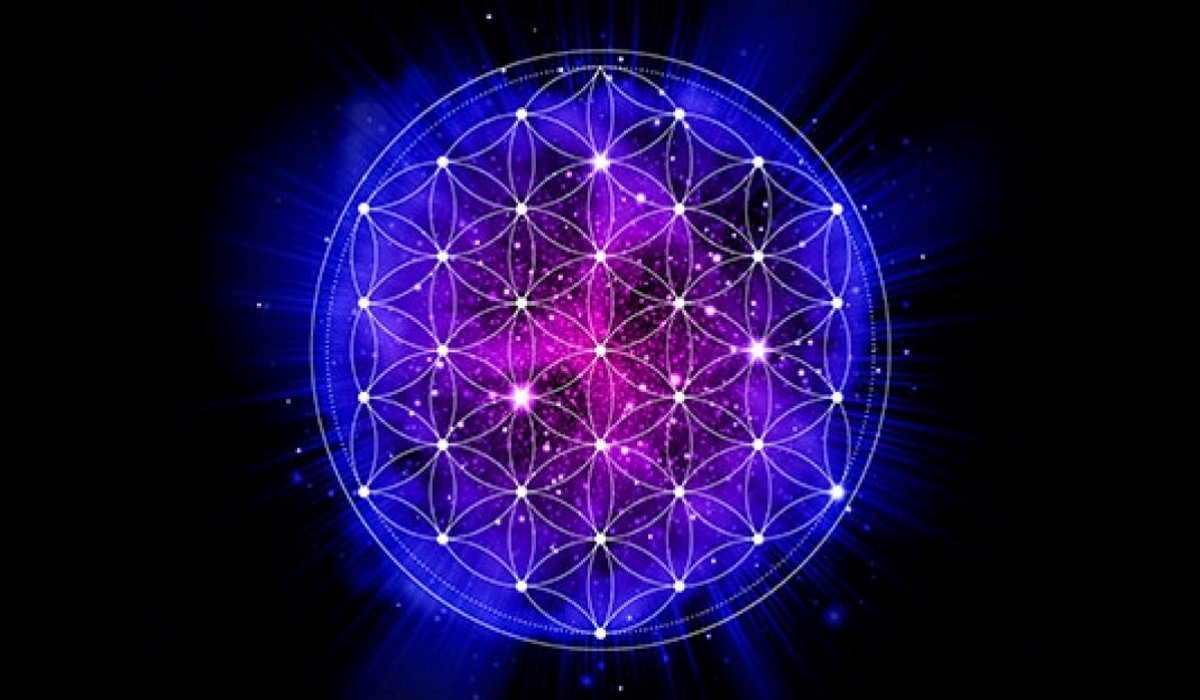 According to what was revealed to Drunvalo, the symbol of the Flower of Life is well known throughout the Universe, except for us! Drunvalo (leading expert on the subject) has written two very interesting books on the flower of life.

In its simplest form, the Flower of Life is also called the “Sixth day of Genesis” because it is obtained from the ‘rotation’ of six circles or spheres, each corresponding to a day of Creation. It represents the internal structure of Creation and its completion.

It is an ancient symbol that has been found throughout the world and in every culture. It was known, for example, by the early Coptic Christians, who engraved it on the walls of the temple of Ibis, in El Kharga or in the walls of Abydos Osireion; from the Etruscans, depicted on the shield of a warrior in a bas-relief in the ruins of Vetulonia; from the Chinese, in the former residence of the Emperor, engraved under the feet of a solar lion; by the Jews, who depicted it inside the Temple of Jerusalem and engraved it on the ossuaries and commemorative tombstones.

Every molecule of life, every cell in our body, knows this pattern. It is the pattern of creation and life in every place. Indeed, according to Drunvalo, there is nothing, absolutely nothing in the Universe that is not connected with the schema of the Flower of Life.

It is said that the great masters agreed to reveal this ancient knowledge, known and represented by the scheme of the Flower of Life. 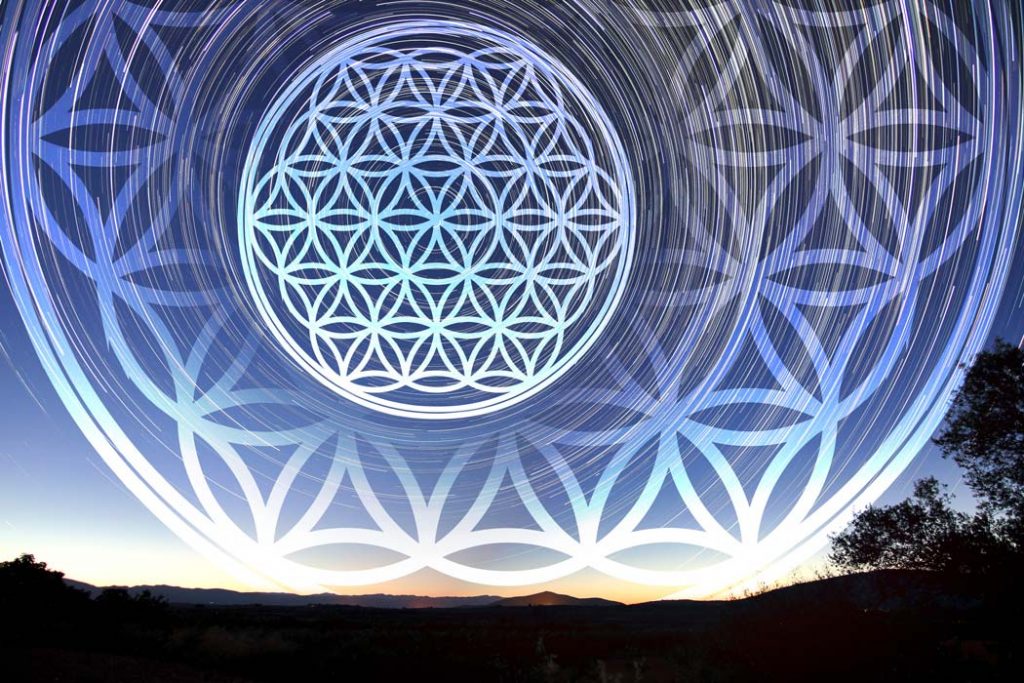 Among the ancient Celts, it was interpreted as a moving symbol and therefore represented the vivifying and generating power of the Sun: the star would transmit its healing and protective power to the sign. He would favor a birth and a fortunate life, so it does not seem a coincidence, therefore, that this symbol is found very frequently in places in need of protection and defense, such as the locks and cradles of newborns.

The fact of being referred to in number 6, which symbolizes Creation, unites it to the “Wheel of Life” with six rays, which symbolizes the alternation of seasons and human events, and the Hexagram which, like the Flower of Life, it can be inscribed inside a perfectly hexagonal structure.

It is often found in some churches, such as the Basilica of San Clemente in Rome, one of the most important basilicas of Christianity. The Jewish Wisdom has associated it to the Sephirotic Tree or  Tree of Life (or of Knowledge ), whose structure can be constructed starting from this symbol.

In its extended form, the Flower of Life is of considerable importance because it is recognized in its structure perfect mathematics, with the presence of the “golden number” which is esoterically considered sacred, since in nature it is present in many forms, in visible matter.

The ancient architects have cleverly inserted it in every structure they built, Renaissance painters made it a model of perfection in the scenes represented with proportions, precisely, auras. The flower of life was considered by symbolists, by the first initiates and by the mystery schools as a starting point for the construction of the Platonic solids, according to a mechanism that allows passing from the two-dimensionality to the three-dimensionality.

The Metatron Cube and the Platonic Solids: 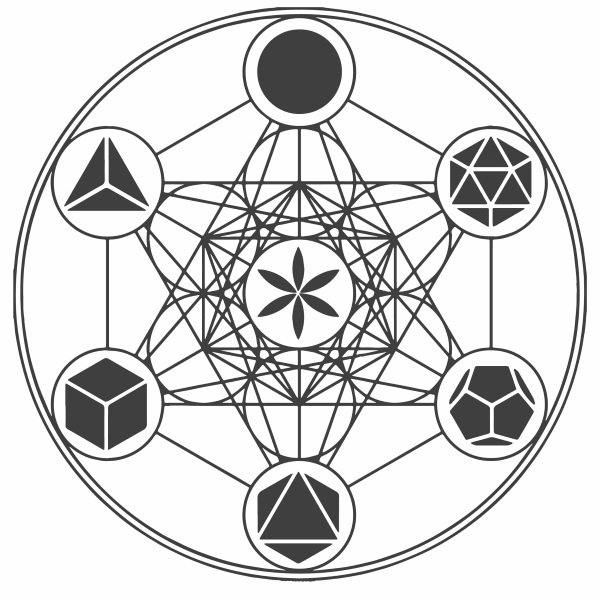 The “Flower of Life” hides among its petals the “Fruit of Life”, a figure of great importance as it represents the basis of what is known as the Metatron Cube. This solid in turn contains 4 of the 5 Platonic Solids: cube, octahedron, dodecahedron, and the icosahedron (picture).

Platonic solids are characterized by the same measurements of sides, surfaces, and angles. They are solids inscribable in a sphere, and all of them contain a tetrahedral star, which can be seen as a ” Hexagram ” which is expressed in the three-dimensional form (picture).

All this was an integral part of the initiatory knowledge of the priestly class, particularly the Sumerian and Egyptian class, and later Templar, who saw in these solids the shape of the elements:

It is a secret code used by many advanced races and by space navigators.
The Flower of Life Code contains all the wisdom and is similar to the genetic code contained in our DNA. This genetic code goes beyond the known forms of teaching and is found in all the structures of our reality.

All the frequencies of light, sound, and music are found in this geometric structure, which exists as a holographic scheme, defined in the forms of both atoms and galaxies.

Drunvalo initially received information that the symbol of the Flower of Life was inscribed on one of the ceilings of the Temple of Osiris, in Abydos, Egypt.

Today we know that the Symbol of the Flower of Life was found in Massada (Israel), on Mount Sinai, in Japan, China, India, Spain, Italy, and Germany.

Being an Intuitive Empath Is a Gift – 17 Reasons Why

What Does Your House Number Mean According to Numerology?

What Your Birthday Tarot Card Says About Your Life Path