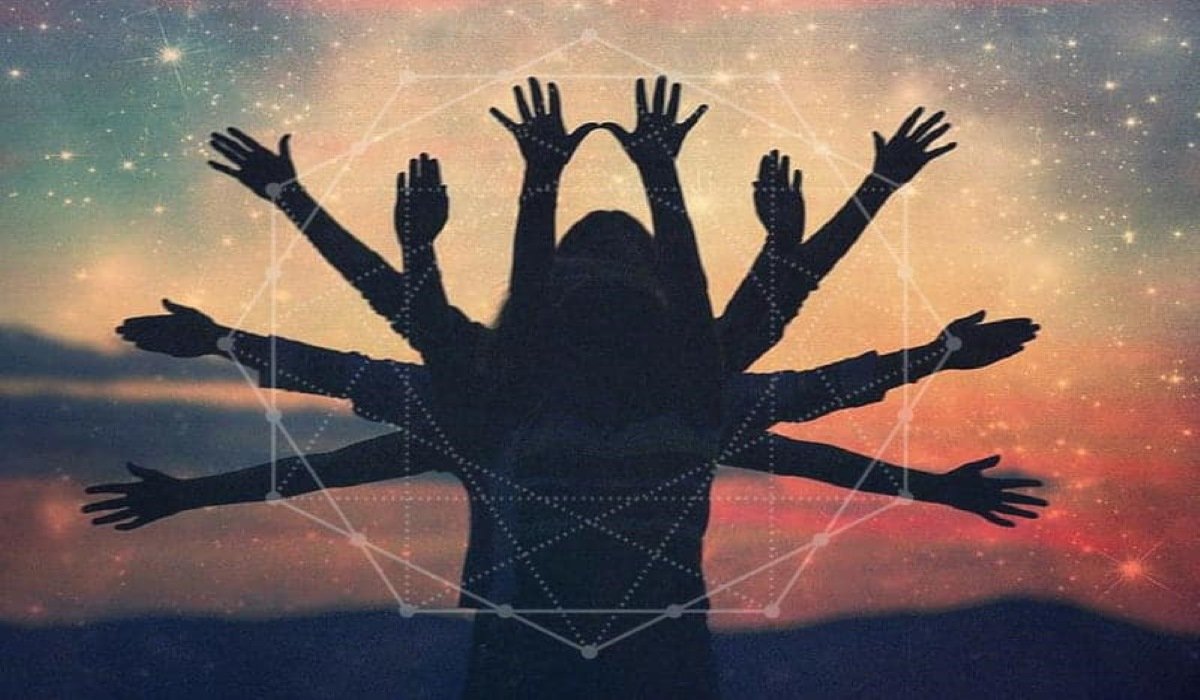 “I see everything,” he said.

We were at the park practicing the Dao Saber sword game when he came to the “network”.

Although he claimed to be spiritually awake, my inclination shivers at the thought of his next words.

He picked up the Dao Saber and swung the sword like a viking swinging his cold steel ax.

When I ask him where he learned to swing like that, he congratulated himself by exclaiming: “I learned all my movements by the power of the Jedi.”

And before he knew it, he discussed with everyone out there why you should use a lot of psychedelic drugs to go into meditation instead of learning it at will.

I have an energy healing teacher with me who also saw the ingenuity of the words and the aura of the man while we were silent.

We saw him, but he couldn’t see us.

And with sympathetic eyes, we could only wish that man did not fall into the traps and spiritual traps that we know too well.

In the journey to our spiritual evolution, there will be many traps and pitfalls that will blind us from our path.

Here are the 7 signs that you may be heading for a spiritual trap and how to relieve yourself of it.

This is the one I have seen with the so-called spiritual gurus and especially with people who are just beginning to awaken to spiritual reality by themselves.

The first taste of power and liberation can lead the mind to believe itself the highest among all the ants in the nation. He considers himself a highly evolved being while everyone is less evolved and less enlightened. He is too spiritual for this world, too spiritual to help others and too spiritual to do anything.

However, when they run around exclaiming “We are all gods!”, They don’t realize the fact that they get hurt when I kick them in the knee. The ego is intelligent. It can mold itself to identify with spiritual things. The ego wraps itself in spiritual garments, spiritual tools, a vegetarian diet, knowing exotic and spiritual words, strange ornaments and design, and acting as a spiritual saint.

It’s an illusion. If all this was taken from you, would it cause suffering? That’s the test. Because if it is, then it is the doing of the ego and not really yours. To combat the spiritual superiority complex, we must always be humble with ourselves.

There are two forms of condemnation: by devotion and by difference.

A form of liberation can also be a means of enslavement.

Consecrating strongly to a certain religion, institution or spiritual tool can trap the seeker in dogma or hatred against the path of others. Some will curse you in hell if you don’t believe their prophet.

But you have to think for yourself. That the beginning of the Universe is here before a prophet or a path sets foot on Earth and that the spiritual path is traced before our incarnation.

And if you have to believe in a single prophet, all those who have not been able to see this prophet, whether they live in Antarctica or on the other side of the world, will never have the chance to seek spiritual pursuit or become their own master.

No institution can be superior to the institution of truth. This secret spiritual pride can manifest itself in the form of preaching spiritual things to anyone who listens or condemning others when they see how others are not as spiritual or as dedicated as they are.

Once the devoted or deceived man is spiritually above others, he begins to believe that he is more powerful than he really is.

Fighting, hatred, and wars erupt from a difference of beliefs. It is when one of the parties cannot tolerate the other in its differences that we experience spiritual unrest.

The lower human mind has a prejudice that their belief is right and that others should follow it – with us or against us mentality. Once someone finds what works for them, they usually think it’s the only way and everyone should do it their way or take the highway. Then they develop a feeling of intolerance for the spiritual journey of others.

What is the use of a spiritual path if it leads to the intolerance of others? Both sides are blind to see the truth of reality. The difference we see is just a piece of the perception of reality. When we assemble both parts, we realize that there are no differences and that the “difference” is only a unit hidden from view.

For example, we think cold is the opposite of hot. But in reality, cold and hot, it’s the same thing. If you look at the thermostat, the cold is on the same scale as the hot, just at the other end of the pole. There is no starting point for where the hot and cold ends start.

When we hold on to a belief so strongly, we don’t see what lies ahead. So be open-minded and learn from everyone even if their beliefs are extremely different from yours.

I saw several times those who made an astral projection or a regression of the past life, ending up believing that they were the reincarnation of Bob Marley or of Jesus Christ.

First, the astral kingdom is as real as the physical world. Second, you’re just tripping. Your astral projection or regression from the past is not as real as you hope.

So calm down. Go eat a sandwich. You are not the reincarnation of Elvis Presley. You just had a vision. These visions are like symbolic messages. But they are by no means literal. Yes, these peak experiences are so extreme that it seems real.

However, one must realize the illusion of it all, the nature of the flow instead of its fixity of reality. Seeing the vision of a god does not mean that it is really there. You are just tripping over a natural psychedelic drug.

The literal path is the path of destruction and delusion. And there are countless good-intentioned spiritual people who fall for it and make everything literal. It is also the destruction caused by many religions, who wrote their books and signed by dogma.

One example is the Bible, an occult book of truth filled with hidden meanings and allegories that should not be taken literally, otherwise, the seeker will fall into illusion and dogma. Don’t take anything literal. Do not surrender your mind and reason to an unknown vision or experience. Instead, find out what it means to you and its hidden meanings.

Recommended: 7 Realities that Everyone Must Face in Their Spiritual Journey.

When you begin the path of the spiritual journey, you will naturally want to help others. You will want to connect with people. You will naturally serve others and heal others as best you can. But by doing it too much, you prepare to be trampled on and thrown aside. Your energy will be exhausted and your mental health lost in confusion.

The first thing to understand is that you live in the physical world, where many people are more interested in taking than giving. Some souls cannot be helped at this stage and it is not our way to force them to follow our way.

You can lead a horse to the water but you can’t make it drink.

To make sure you stay focused on your life, set boundaries with yourself and with others and don’t help too much or over-welcome others.

The extremist intervenes after rejecting the current paradigm. When we find a belief or community that we no longer identify, we turn 180 degrees to the opposite end of the polarity. But extremity will manifest in our life not in peace but in another form of restlessness.

There is a moderation scale for everything. If we tilt the balance scale too far to the right or too far to the left, the consequences will be serious. Getting into extremes of spiritual concepts can be as dangerous as going into the extreme spectrum of materialism.

As they become greedy for food, sex, and entertainment, spiritual extremists may weaken. Like the poor monks who starved themselves by fasting and practicing too much meditation, they no longer even had the energy to walk.

The delusions of greatness generally manifest themselves in this form, where the spiritual man hopes to reach psychic powers and astral journeys to satisfy his need for a new experience. The need to escape is so powerful that one can create one’s own fantasy. It can also lead them to darker routes, whether the seeker is stuck in a continuous search for the outside world or find comfort in dark alliances.

Bad advice comes from false gurus and people who haven’t experienced it themselves. Spirituality is bombarded with many false gurus who wish to be praised by their disciples. You should be careful when you meet someone with a highly esteemed title next to their name: master, pagan deities, arch-angel, or any yogi name who has a “spiritual” ring.

False gurus will play on your preconceived ideas about what an “enlightened” person looks like, sounds and acts. I recently saw a man teaching how to achieve enlightenment in a weekend retreat for $ 1,500. If it takes the Buddha more than 6 years for enlightenment, what makes a modern man achieve it on a weekend?

Yet the poor disciples believe that he is enlightened simply because he said it, did so, and that it is an easy and quick spirituality. All in all, you will know a spiritual teacher “by his fruits”. Their actions will be all you need to know who he is.

If your intuition is funny, trust it. Use your judgment to find advice that will point you in the right direction. Your intuition will also help you.

Recommended: 7 Reasons Why Your Spiritual Awakening Has Suddenly Stopped.

The intention of the seeker is the most important part of spiritual growth. Now there is nothing wrong with wanting a relationship, wealth, health or power, but entering spirituality for the sole purpose of using it as a machine will soon give you a fatal error that traps you.

They prefer to spend their time talking and reading on spiritual books rather than living spiritually and perfecting their inner selves. Even after the relaxing and uplifting experience one can have, they always felt like they were missing something.

It is the fall – the mistake of relying only on external information for spiritual progress. When the spiritual seeker relies on the outside for spiritual understanding, he is not only the prey of business gurus, but he aims to seek external validation of his existence.

In the end, he wastes large sums of money for people to tell him what he already knows and wastes time that he could use to continue his practices. Of course, reading spiritual information will help you on your way. But real spiritual progress comes through practice, without listening for 48 hours on a DVD to about 178 different types of meditation.

The truth is inside and unless you find it inside you, your faith will falter. Intellectual stimulation does not replace spiritual experiences.

Are you falling into a spiritual pitfall?

It’s okay to be in these situations because I went there myself.

The important thing is to recognize it and learn from it.

Humility, receptivity, and discernment are the ingredients to get you out of spiritual traps.

The 5 Best Crystals to Support Men.