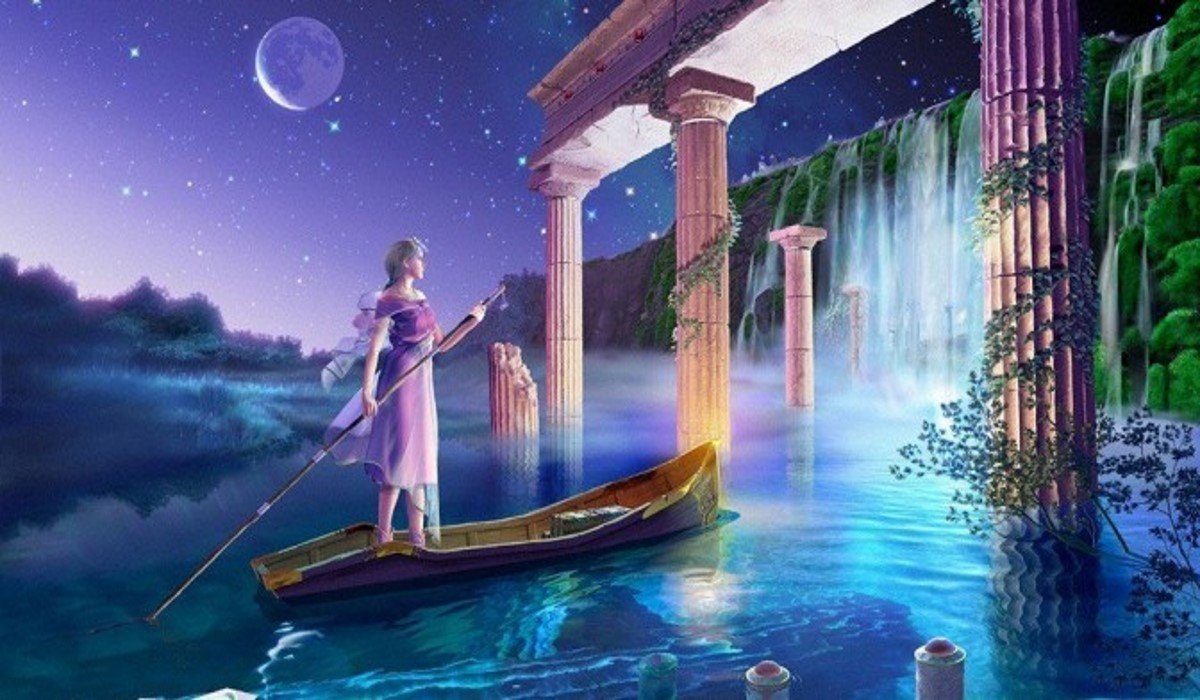 The age of the soul is an evolutionary process, an experiential process that extends over many lives and can be divided into certain cycles. We distinguish five ages of the Soul:

We will now indicate the characteristics of the individual ages of the soul.

Before incarnating for the first time, this soul has never been in the material world. On the one hand, it is fascinated by the game that we call “life”, on the other this material reality plane seems frightening.

It is afraid of this new world, but at the same time feels magically attracted to it, and overcomes this fear by incarnating in a family nucleus in which it is offered an abundance of intimacy, in which emotional security reigns, where it feels supported and is not subjected to at any pressure, where throughout life it is accepted in the large family, in the clan, in the group. There the newborn soul feels good. It lives the first incarnations almost like in a dream, it gives the impression of being with its head in the clouds, of not being completely present.

In the big family, it can overcome its fear, because there is always someone around it. It never finds itself in the embarrassing situation of being alone in a room. It needs the closeness of other people, for it, it is something very important because it is terribly insecure and anxious. It needs someone to trust and is also very fond of his family.

Its biggest fear is to go out and find itself suddenly outside alone. This newborn soul grows gradually, this cycle involves several incarnations. Little by little, at the moment it lets go and takes its first steps outward, the soul enters the age of the child soul.

The hallmark of the child soul is curiosity: it wants to be everywhere, wants to know everything, wants to see everything, watches everything and does not miss anything. It is interested in everything that happens, in all the conversation topics of others. It is present in the places where you work and want to understand everything.

Assisting, observing and asking questions are its main characteristics. It loves and feels curiosity about everything there is to see and hear, and eagerly absorbs all this information, like a sponge. Its greatest wish is to be part of something.

It is also capable of performing simple jobs but eschews demanding tasks. The child soul is not capable of thinking independently and drawing its own conclusions from the information gathered. At this age, it is also willing to carry out actions and tasks for others, whose simple nature cannot be realized. It takes every information at face value.

As the child’s soul reacts and once out of this cycle, it will have the idea of ​​knowing how to do everything better and will thus enter the phase of the adolescent soul.

Recommended: Reincarnation: 4 Signs That This Isn’t Your First Life On Earth.

The adolescent soul rushes to experience and is convinced that it is better than the others. It wants to show its skills, show off and be admired. It wants to be perfect. The adolescent soul wishes to engage in all that it has observed and listened to in the phase of the child soul. At the same time, it is extraordinarily reckless, for it no goal is too heavy, too big, too expensive or too dangerous: the soul wants to show the world that it is exceptional.

The adolescent soul has no inner certainties of any kind and ultimately is not willing to take responsibility. If one of its goals goes wrong, it is basically the fault of others. It overcomes the lack of security with luxury and appearance. Its clothes will be exclusive, its means of transport showy, as well as its home. It loves to show off and wants to show the world how efficient and brilliant it is.

If its exterior appearance threatens to burst like a soap bubble, in an emergency it is willing to resort to violence, just to maintain the image it has laboriously created. In doing so it lets itself be caught up in lies and criminal actions. It is often intimately torn and upset and does everything to avoid perceiving these feelings. Furthermore, for a long time, it feels perfect and tries to convey this image of itself to others.

Deep down it is insecure: it lacks the experiences and values ​​of a mature soul. At the end of this cycle, it can happen that the adolescent soul falls into a deep trauma. So far it has had only external things as its point of reference, struggled to show off and to maintain its perfect mask. All of this suddenly slips from its fingers and it feels itself at the end of its abilities.

At this point the collapse often takes place: the adolescent soul clearly sees its own fictitious world, its own mask, begins to doubt itself and feels exhausted. It is entering the age of the mature soul.

Even the mature soul tends to make experiences, but for it, it is important to understand them, critically analyze them and elaborate them inwardly. It no longer throws itself blindly into things but chooses carefully the situations in which it wants to experiment. During the cycle of the adolescent soul, it has collected many experiences that have come and gone so often that it has not had time to elaborate them inwardly, but now this phase has ended.

Now the soul sets new priorities and new values; perceives their feelings and aspires to truth and authenticity. It has a keen sense of justice and drops its old protective mask and outward appearance. Sometimes it still fears not being accepted by others for what it is. This whole evolutionary cycle is accomplished in its interiority and therefore needs to spend time alone: ​​time to mull it over, feel, understand, and time to identify one’s own point of view.

While the adolescent soul did everything to avoid being alone and struggling over things, loneliness becomes a necessity for the adult soul. It dies from the desire to find out what takes place within itself and often adheres to self-help groups to better understand itself and others in a protected environment.

While the adolescent soul transmitted purely notional knowledge, the mature one is set in a new context, that of knowledge by experience. In the final phase of this cycle, it attributes little value to the titles, which instead were still a showpiece for the adolescent soul. This was the cycle of the mature soul, followed by that of the old soul.

The old soul is spiritual by nature, yet it can happen that it does not consciously deal with spirituality. It has spontaneous access to inner images and to meditative limit experiences, and consciously works with energies or clearly perceives its own inner voice, connecting its conscience to higher entities, thus expanding its conception of the world.

There are always many possibilities to develop one’s divinity and potential. The old soul has clearly recognized its own path and follows it undaunted. It would have exceptional managerial skills because it is balanced and no longer seeks to convert others because it is naturally and authentically divine.

It is as solid as a rock and exudes tranquility, peace, authority and security in the environment that surrounds it, even when chaos reigns. It is a source of being. And here there is a parallelism with the newborn soul, about which we said that in its first incarnations it dreams of entering life. The exact opposite happens to the old soul: in fact, it dreams of leaving life.

Often it is in contact with its spiritual homeland thanks to inner images or inner communication but it has the faculty to pass quickly from one state to another and to settle matters in the material sphere. It willingly dedicates itself to itself, to its multiple talents, to its thoughts, images, and energies. Its inner knowledge and its mental contemplation reveal the laws of life. Taking care of these things gives them great joy.

It has its own personal power and has a great soul strength, given that it is in the process of recasting with his soul brothers and sisters. It is characterized by great inner peace and authenticity. At the end of this cycle, it will return to its spiritual homeland forever.

This is what we wanted to tell you about the ages of the soul. But there is also another aspect that we would like to illustrate to you.

All the human beings that are currently with you on Earth, already have numerous incarnations behind them.

None of you are here for the first time: you have all been there several times before.

In addition, every time you return to Earth in a new body, you go through the neonatal, infant, adolescent and, before and after, at some point you become adults. And in the meantime you live your personal soul evolutionary path once again: retrace the phase of the newborn soul, that of the child soul, that of the adolescent soul and you evolve to the degree you had reached in your previous incarnation. Then it is obvious that your evolution proceeds further! In a sense, you are accelerating the development of your incarnation cycle.

For this reason, it is possible that there is a period in which you strive for perfection, absorb chatter and gossip, you are very active at a professional level, you are violent or militant, you go through your personal crises and suffering, you turn to your inner self and find solutions. Each of these phases is legitimate. Don’t complain about yourself! Go back over your past incarnations and the evolutionary steps experienced, not in a detailed way, but rather by reliving the various cycles in the course of this existence and overcoming them.

Recommended: A Person is Born 7 Times during His Life, Each Time for a Particular Reason.

Many of you remember having preferred other movies when they were young, of having had other idols and other values, and these inclinations probably come from a past incarnation in which you had an adolescent soul. Then the thing is resolved and you continue to evolve.

You are currently, on a very turbulent time schedule, a plan in which transformation is the order of the day and there may happen at any moment to leave the soul age you had memorized, to move on to the next one. It may, therefore, happen that you pass from the adolescent soul to the mature one, or from the mature soul to the old one. In general, we remain for different lives in the same soul age, but at your age it is different.

These 9 Signs Prove that You are an Old Soul

6 Things You Give Up when You Feel Spiritually Awakened

The 7 Stages of Spiritual Evolution. Which One Are You In?

Can You Recognise A Dream From A Past Life?