Although not many people realize it, the Great Pyramids, on the whole, are much more than beautiful. They hold special energies and are quite spiritual if you are prepared to see them properly. In fact, according to the BBC, the pyramids may even have been built to line up with two stars circling the point where they are located.

We believe it fuels their energies in a way that we won’t really be able to comprehend for very long. You see, as the stars moved overtime when these pyramids were built, maybe there was a star right above each pyramid. Even though such an alignment wouldn’t last forever, it’s something we should all be aware of.

On this topic, the BBC wrote the following:

Almost 4,500 years ago, each star was about 10 degrees from the celestial pole which was directly between them. When one star was exactly above the other in the sky, astronomers could find a line pointing due north.

But the alignment was only true for a few years around 2500 BC. Before and after this period, the stars deviated from the north-south line, and anyone using the stars to plot a direction would have made errors.

You see, those who believe in the Orion correlation theory seem to believe deeply that the three pyramids were built to align with Orion’s belt. This is because the stars of Orion’s belt are associated with Osiris who was the god of rebirth and the afterlife. While there are a few different versions of this theory, overall it would make a lot of sense given how deeply rooted the Egyptians were in this stuff.

The pyramids because of this alignment at the time probably gained a lot of power or an energetic company from the celestial world. If you are an energy sensitive person, you know how things like this can happen. The more we tap into different celestial beings, the more we are able to gain as a result.

A lot of people believe that pyramids have that shape because that in itself holds some kind of magical power and honestly I can’t say I don’t agree. Pyramids are great for amplifying and really bring full circle energies that we might not find otherwise. While it can be a bit confusing, I think the pyramids as a whole are quite spiritually engrained.

Regarding the energies of the pyramids: 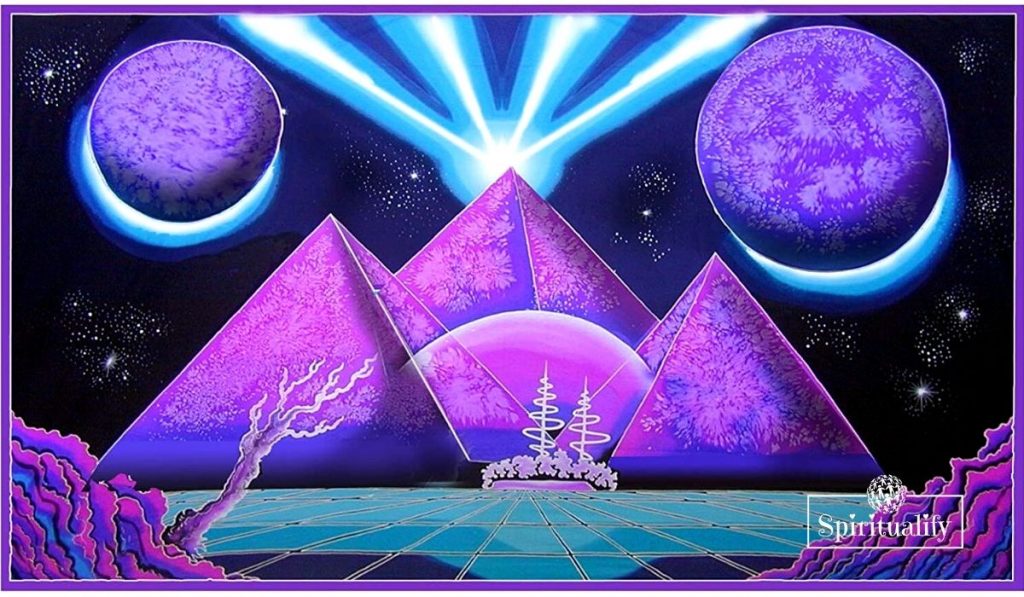 For years mankind has been fascinated by the great pyramids of Egypt. How were the men of the time able to create these massive structures of impeccable beauty? The Great Pyramid in Giza is the oldest man-made structure of its size. At over 3,800 years old, it has truly stood the test of time. Not only that; it was created to such perfection that modern technology does not even allow us to reproduce it.

Many believe that humans may have had help creating them from other worlds, or that divine knowledge or inspiration was what made the feat possible. Whatever you think of their origins, there is no denying that these structures are impressive and beautiful. No wonder they are among the Seven Greatest Wonders of the World.

The exact reasons for the construction of the pyramids are murky at best. It was long believed that the pyramids were built as tombs for the pharaohs, but many insist that they had other uses.

Spiritually, the pyramid is also highly symbolic. The base represents the physical body, the sides the journey of life, and the point symbolizes union with each other’s higher power. The depth of symbolism and mystery surrounding the pyramids makes them incredible tools. Several books have been written on their possible metaphysical goals. They are believed to promote healing, prolong life, and positively charge objects within their walls.

Pyramids are available in a variety of sizes, materials, and colors. Art glass pyramids are beautiful and functional. Small pyramids are perfect for charging pendulums or small vials of healing herbs or potions. Larger pyramids can be used to charge water for a healing tonic, or larger batches of herbs or stones for other applications.

When choosing a pyramid to use in your spiritual practice; consider not only size and material but also color. Color has important energetic properties that will also be amplified by your pyramid.

For example, black offers powerful protective powers, so a black glass or art stone pyramid is excellent for protection and cleansing rituals. Red is a color of passion and high energy and can be great for enhancing creativity and boosting motivation. Green is both a healing and an attractive color in all its forms. A green pyramid can impart healing and manifestation energies to your items.

What do you think of the powers of pyramids? Do you think they tap into something more than what we can see?

This is What Numerology has to Say about Your Name

16 Symptoms of Energy Shifts You Should Not Ignore

12 Signs that You Have Encountered a Love of Past Life

35 Toxic Spiritual Traits that You Should Quit Today

5 Ways to Harness the Mighty Energy of October